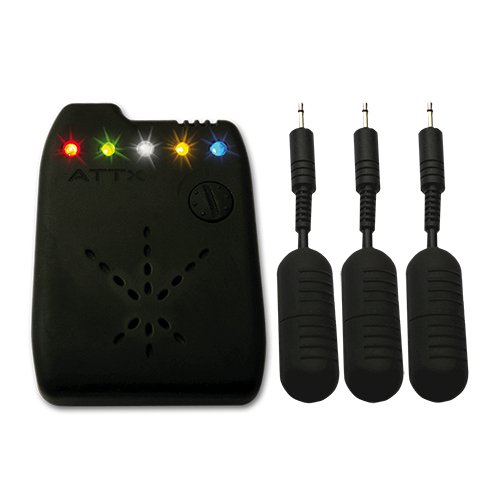 The Version 2 (V2) ATTx Remote System allows anglers to receive remote indication from almost any buzzer on the market!

The V2 system includes a number of key features:

Improved Battery Life on Receiver and Transmitter – The Receiver is powered by a single AA Battery providing a battery life of up 3 weeks of normal use.

The Transmitter is powered from a single GP11A battery lasting up to 1 season of normal use. Batteries are not included and are sold separately.

Mimics Alarm Beeps – The Receiver beeps at the same rate at which signals are received by the Transmitters, from the buzzer output, thereby sounding anything from a single bleep to a full-blown ‘one-toner’.

Improved Range and Performance – tested to 100m + range under optimum bank side conditions.

Improved Transmitter Design –The electronic circuitry is encased in its own watertight compartment to prevent the risk of water coming in, transmitter corrosion and any resultant malfunction.

Activation on all LEDs (for simultaneous runs).

LED’s will remain on for 40 seconds after the last buzzer signal is received from the transmitter.

Fully compatibility with the Deluxe Receiver.

These systems are available with either 2.5mm or 3.5mm Jack Plugs.

An ‘All Blue LED’ system is also available at the same price.

*To make sure that these items stay in tip top condition it is important to look after them and treat them with care.

To ensure the greatest reliability and longevity from your Version 2 ATTx system:

Clean and thoroughly dry the items off before storing them in a dry place.

We recommend keeping them somewhere with stable temperatures to avoid heating and cooling that may cause condensation.

If you’re putting the V2ATTx system away for extended periods of time we strongly recommend taking out the batteries.

*Battery leaks are not covered by the ATT warranty.